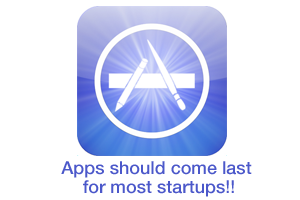 So you have an idea for the next hot mobile app and are preparing to quit your job to launch the new business. Here’s the most important reason you should reconsider doing so.

Yesterday afternoon I had coffee with a local startup that is preparing to release the public version of their iPhone app. Almost four months ago the company was demoing their product to investors and was on the verge of launching. Today I got to finally see their app in person on the founder’s phone which still hasn’t launched. It has been four months and the company still has no data on how the market will receive their product and is still making miniscule changes to the app.

I sympathize with the founder, I was in his shoes months ago when we were building Holler. We spent months perfecting the flow, adding features, and making everything look beautiful. While you can read about the story here, we implemented a new policy once I started programming the iPhone app myself (after firing the original developer, etc): we were going to strip down all the features and push out a first version within five weeks come hell or high water.

The app launched with a critical bug that was quickly removed. We started testing things and adding features that we originally wanted to. We started perfecting some of the flow through minor changes and then hit a wall: we’d have to go through a reorganization of the app that would take months to push out (my guess was 6 - 10 weeks on the low end). That’s when I decided that this business was not for me. Coming from a world where you can develop and launch something in days (the web), spending months to test a hypothesis was absolutely unacceptable.

What I’ve since learned is that we could have performed numerous tests prior to investing so much time in building an app. As Vinicius Vacanti, Founder of Yipit, published the other day, performing small experiments to understand demand for your product before you build it is critical. In other words: stop living in your mind. We all do it.

We all experience the world through our own eyes and assume that others (or a lot of them) see things the way that we do. We then proceed to build a product completely around that vision in our head. It’s a guaranteed way to burn a lot of your money. Perform smaller tests that validate your concept before you consider making the investment in that genius mobile app idea that has been bugging you for a while. It will save you a ton of money and a ton of pain.