The other day Facebook turned on promoted posts so I tested it out for my last blog post? However unlike most people who are charged $7 for a promoted post, I was charged $49, potentially due to my high subscriber count. With 189,000 subscribers and 4,300 friends, how many clicks did I get on my shared article? Approximately 75. 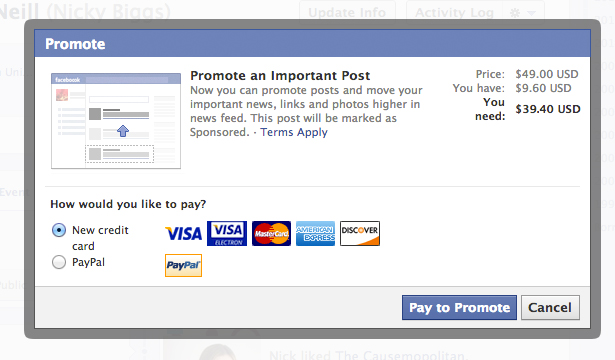 The result was I ended up paying $0.65 per click. Granted, there were some weaknesses to my article. The title wasn’t the greatest, and more importantly, Facebook wasn’t able to display my article image for some reason. So was it worth it?

Well, I didn’t really have any clearly defined expectations when I started. However I figured I could at least get a 1 percent click through from my subscribers. That would be nearly 2,000 clicks. I fell far short of that number. As for comparing it to other platforms? A few days ago I tested out Twitter’s promoted tweets feature and found that the average cost of a click was $1.

My conclusion is that promoted news feed stories on any social platform is expensive. Unless you have a product to sell that you can clearly measure your investment against, it’s a lot of money to casually spend on little results. What has your experience been? Have you tested out promoted posts?