What do you think it would feel like if half the emails you sent were no longer reaching their intended destination? Probably something similar to the emotions articulated by Nick Bilton in his article today about sharing content on Facebook.

Nick, like most others who have attracted a large following on Facebook, has seen a significant decrease in the amount of interactions on each of his posts. In order to increase the visibility of his content, he has been forced to pay for distribution.

If we think about subscribing to other users on Facebook, most think it’s fairly straight-forward: you subscribe to someone and you get their posts delivered to you.

That’s not how it works though. The only way to guarantee that you get all the posts that someone publishes is by completing a two-step process.

Next, after you click on friend or follow (switched from what previously stated “subscribe”), you must hover over the friend or follower and select “get notifications”, as pictured here: 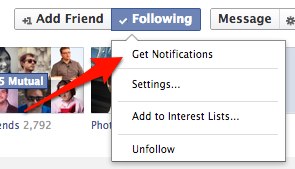 Now, every time that person publishes something on Facebook, you will receive a notification that they’ve posted something. However, if you just followed/subscribed to them, there’s at least a 90 percent chance that you won’t receive their content.

You may be thinking to yourself that this is nuts. Why would I have subscribed to someone if there was a good chance I won’t see their content?

That would be a fair question. Unfortunately though, there isn’t a great answer.

Following or subscribing to someone simply doesn’t work. However Facebook is actively communicating to users that it does. They even communicate subscribers as an indicator of your influence. It shows up at the top of your Facebook profile, on comments you leave around the web, and in Facebook’s search results.

As I always tell them, that number is effectively meaningless. But should it be? If someone subscribes to another Facebook user, isn’t that a sign that they want to hear what that person has to say?

Personally, I wasn’t all that surprised when I saw this happening over the past year. Facebook has always walked a fine line, determining what content to display in the feed. For years, developers would try again and again to show up in the feed only to have Facebook decrease their likelihood of showing up.

Now the same thing is happening to users.

Some people though, like Nick Bilton, feel duped. Rightfully so. If you were going to send out an email to a subscriber list of 10,000 people, typically 10,000 inboxes would receive that message, 20 to 50 percent would then open and read it. 100 percent reach their destination though. However if you broadcast out a message to 10,000 Facebook subscribers, who knows how many will receive the message.

Digital marketers know this and have adapted their metrics. They report “engagement” as the metric that matters. Email open rates, click through rates, likes, comments, retweets, shares, etc.

Yet back in the real world, the world of mass consumers, people perceive your followers and subscriber counts as your measure of influence. They don’t understand the distinction between total and effective reach. Should they?